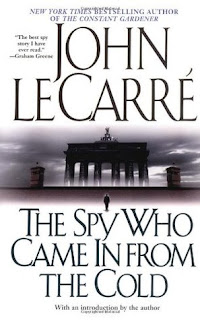 This was my first Le Carre novel, and frankly speaking I am a bit confused. I cant say that I hated it or I liked it very much. All I can say is that IT WAS DIFFERENT.
I have grown up on spy thrillers by Fredrick Forsyth, Robert Ludlum and others, and always, in their books, there is a lot of movement, a lot of action, which was missing in this book. While reading it, more than once, I had the feeling of reading a drama instead of a thriller.
Now, why I had that feeling? Normally, a thriller needs a plot build up, chapters dedicated to happening of events which led to the happening of the main event. But, in this book, I thought that, the build up was very short, in fact I found it hard to really understand what was happening. Especially, during the chapter “DECLINE “I had problems understanding the sequence of the events and the time frame.
No complaints however regarding the protagonist Alec Leamas. I had read somewhere that Le Carre was known for his HUMAN protagonist, someone who is unlike Mr. Bond. Reading this book made me realise what was meant by that article. Maybe, the lack of action, is due to the fact that HUMAN spies are humans, and not capable of over the top action.
The best thing, and the most UNIQUE point, for this book, according to me, was the smearing of the line between the black and white. Le Carre in this novel showed, that when it comes to winning, the only colour present is GREY, where the good doesn't hesitates to use and sacrifice pawns and innocents to be on the top and win.