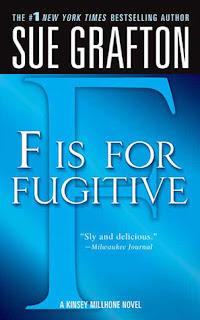 The sixth installment of the Kinsey Millhone series by Sue Grafton. I would start by saying that this is one of the best books in the series. The book is a whodunit, with the murder being something which happened 17 years ago. Jean Timberlake was strangled, her then boyfriend Bailey Fowler was convicted, but he escaped. Now 17 years later he has been captured again. Royce, Bailey’s dad, hires Kinsey to find out who is the real killer as he is convinced that it is not Bailey. Kinsey starts her work, and eventually starts finding dead bodies turning up everywhere.
This book was packed with all the essential Grafton straits, but the mood was much more sombre. The dialogues weren't as quirky as the other books. But what really stood out in this book was the characters and the plot. The characters, according to me couldn't have been more nicely drawn. The town which was ready to portray Bailey as the scapegoat was shown effectively, with almost everyone with a secret to hide.
The plot was the crowning glory. Like a mountain pass, full of twists, turns and thrills, it makes the book an unputdownable read. The famous legwork of Kinsey was present, with that her deduction powers were in full force. And, the ending. The icing on the cake. I could never guess the culprit, nor could guess the motive.
Recommended to every whodunit fan, this book is a sure joy read for anyone who cares to read it.
Posted by crimeonthrill at 08:09