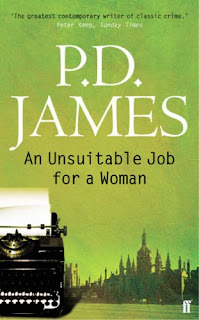 This was my 4th PD James novel. The protagonist of this book happened to be Miss Cordelia Gray, unlike the other three, where the protagonist was Adam Dalgleish, James’s much celebrated policeman.
I am not a big fan of P.D.James as I find her book too literary for my taste. I hate when the author of a crime fiction uses up half a page to describe the weather or the birds on the trees. And, I had the same problem with her other novels. However, in this book, although the same descriptions were present, but were mercifully shorter (I guess this book is the one of the shortest of all her novels).
In the novel, Miss Gray, inherits a Detective Agency after her partner had committed suicide. Later she is hired by Sir Ronald Callender, to find out the reason why his son, Mark, committed suicide. As it happens the suicide turns out to be murder, and Miss Gray solves the crime with almost 40 odd pages left in the book. The plot was nothing out of the ordinary, standard modus operandi and motive, for the killer to commit his crime.
Now, for the characters. Dame James lets her talent lose on this front. The characters are very well drawn up. While reading, the reader can almost visualise the person he is reading about. The dialogues are excellent, especially the speech by the culprit, justifies his stature as an evil person.