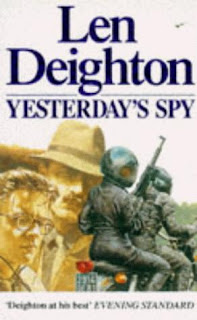 Kinsey Millhone, the P.I. created by Sue Grafton, is seen reading Len Deighton novels in many of her books. I had heard about Deighton, the movie Ipcress File was based on his novel of the same name. So, when I saw this book in a second hand book stall I bought it promptly. But, sadly, what followed was a mediocre read.
The major problem, I had with this book, was that it had no suspense. From the very beginning, the reader knew who was good and who happened to be the bad guy. So, the only portion not known was how the good guy is going to catch the bad guy. So, basically this turned out to be a spy adventure novel. But, saying that the book had a speed of its own. Once I started reading I never felt out of pace. The events described were short and strong, the dialogues were short too, though at times clichéd.
The characterisations were adequate for a spy novel. Since the main feature of the book is based on catching and stopping the villain from carrying out his villainy, detailed characterisation was unnecessary and mercifully not provided.
I guess this was a wrong choice to begin my tryst with Len Deighton. Well, I will lok out for another of his novels, and try it out, before giving up on him.