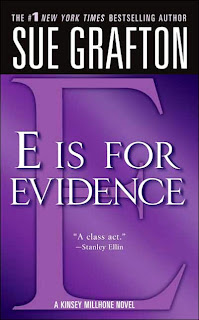 The fifth installment of the Kinsey Millhone series by Sue Grafton. In this one, unlike the other books, Kinsey was working on her own to defend herself from being framed in a insurance fraud. The book had all the qualities to be marked as an UNPUTDOWNABLE. All the trade mark qualities of a Sue Grafton was present, funny dialogues, abundance of characters, a lot of leg work and fact finding by Kinsey, and a blistering pace.
But, saying all this, I would still label this book as an adventure. The mystery element was very much present, but the truth came out, not because of some fascinating deduction by Kinsey, but through a sort of confession by a character.
The plot of this novel was really twisted and fast. This book would be right up there with the gory and twisted Scandinavian thrillers of today, in respect of the plot. It had almost everything in it, financial fraud, murder, bombs, treachery and even Incest.
A hugely recommended book for any mystery addict. Certainly one of the best books to come out of Ms.Grafton's stable.