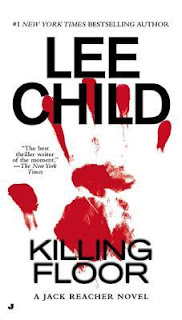 KILLING FLOOR was Lee Child’s debut novel, featuring Jack Reacher, the ex-military police protagonist created by him. I had read Child’s THE ENEMY earlier, and had liked what I had read. Although there was nothing out of ordinary in the book, but it had pace, and was filled with thrill, suspense and action packed sequences.
So, when I finished reading KILLING FLOOR, I had a feeling that this author was destined to be counted among the best of thriller fiction authors of our generation. Never once, while reading the book I had the feeling that I was reading a debut novel.
The book had a vice like grip on me, the plot though common, was filled with suspense, and action. The hero Jack Reacher, the best among the current crop of fictional protagonists, was gritty and funny with a tinge of menacing.
And, lastly the dialogues, what attitude. The book could have survived alone on the dialogues. They were quirky, emotional, robust and intimidating.
One special mention would be for the fight scenes. Normally, I don’t pay much attention to them, but the scenes in this book were so nicely done, that they became an integral part of the plot. Which could not be skipped. Same goes for the torture scenes, they were short and gory, but were potent enough to send a chill down the reader’s spine.
P.S. Tom Cruise playing the role of Jack Reacher, is the upcoming movie, is such a let down.
Posted by crimeonthrill at 22:54