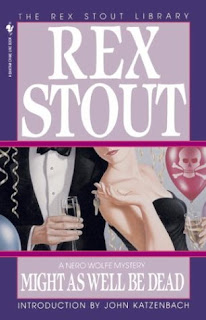 
The book was the first Rex Stout novel, featuring Nero Wolfe, I have read. I had heard a lot about the author, high recommendations, which were justified, as he was nominated for the greatest Mystery Writer of the Century, and his series the Best Mystery Series of The Century at Bouchercon 2000, the world's largest mystery convention.
The book starts when Wolfe gets a visit from James Herold asking him to find him his son, Paul Herold. The son was banished from his family and business when he was caught stealing money from his dad’s business. Now, on the behest of his mother, the dad wants his son back, and he has also unearthed evidences which points to the fact that may be Paul Herold was innocent of the embezzlement. So, Wolfe starts his search and finds himself in the midst of dead bodies, one of them belonging to a colleague of his.
The book was set in 1956, now I always felt that as a man in 2012, I was not comfortable with the language used in the book. Nowadays we have got accustomed to short paragraphs and shorter sentences, and here I was barged with half a page paragraphs, and mile long sentences. It was a daunting task, to keep the track of the plot. The language was muddling it up for me.
Even if I could have ignored the grammar, I was hit with the sheer abundance of characters. There were a lots of them, in this book, and with huge paragraphs, and more than one character appearing in one paragraph, things were bound to get muddled, and they did.
And, lastly the plot didn’t make any sense to me. Too much emphasis on pure coincidence, bordering on the impossible. A convict, who had his decision pending the very next day, after Wolfe is contacted by Herold Sr., turning out to be the person being searched for, is the epitome of coincidence.
Maybe, this was not the best of Stout’s work. A man doesn’t get nominated for Best Mystery Writer by writing this stuff. So, will be waiting for my next Rex Stout novel, to get in touch with a real masterpiece.
Posted by crimeonthrill at 14:01