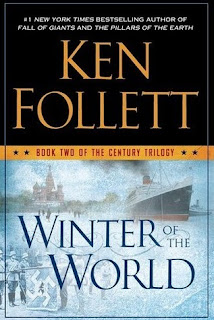 “....we have to fight the Communists just as hard as the Fascists. They’re both evil”

The first book of the Century Trilogy by Ken Follet, dealt with the first world war, and the events surrounding it. This book starts in the year 1933, leads up to the Second World War, finishing off in the year 1949. The events like the first book, is spread over the two continents on the either side of the Atlantic.
The book is a fast read. The prospect of reading 900 odd pages, though daunting at first, seems easy as the pages fly away. The plot just carries from where the last book had left it. In this edition the principle characters of the last book were all there, but the spotlight was shone on their offspring.
The prose also followed the pattern of the last book. Short paragraphs, and a lot of dialogues between the characters. This was one of the best points of the book according to me. Follet had described places, showed events happening all through dialogues. These first person dialogues helped the book in not becoming boring.
Another great aspect of the book was that Follet had been able to keep the interest of the reader alive for all the main characters. There were lots of them, based in different countries. By the end of the book, I was really curious to know what happened to each of them.
But one small glitch according to me was the abundance of CO INCIDENCES. The book was full of them. Agreed, that the book wouldn’t have been as fast and as unputdownable, if those chance encounters between the characters weren’t there. But still at times, when, almost every character was bumping into another character that happened to know him or her, the phrase “ITS A SMALL WORLD” seemed clichéd.
Lastly, the book showed us, the ones who were born long after the war, the brutality of the war. Reading the book, I felt so sad, thinking actually what people had to go through in those times. The brutality of Nazism, the madness of Communism, and the bloodlust of the War, made every other thing in the book pale in its comparison. There were little or no mention of the concentration camps, but one major event, which we seldom read about, was portrayed in the book. Action T4, the Nazi plan to kill anyone who is “unproductive” in the fatherland was given a lot of attention in the book.

P.S. Ken Follet is one of my favourite authors of all times. I have a unwritten doctrine of not reading anything but thrillers. But, when Follet brings out a novel. I slowly move away from my doctrine, grab his book and start reading. Because, I am always sure of being entertained, and he never fails me.
Posted by crimeonthrill at 17:46