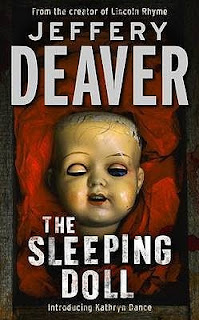 Very few things to write about this book.

2. The main protagonist of Katheryn Dance, is best suited as a cameo character, like her role in another Deaver Novel.

I am not a chauvinist, but this lady doesn’t have what it takes to become a main character. (I have nothing against women. Marple and Millhone, JAI HO!!! )

3. The culprit and the sidekick was comical. Yes, they did have a violent streak but they were comical, no doubt about it.

4. Useless words, meaningless dialogues. The book was filled with these. Dialogues which could have been easily avoided, and would have sped up the book.

5. Like every Deaver book, the subject taught here was Kinesics. The subject was interesting; I would definitely wear shades, the next time I lie. But, it was not helping the plot. So, sadly it became boring.

6. The book could have been completed in 250 odd pages, had these extra arms chopped off. But, it was stuffed and made to bloat to 500 odd pages.

7. Deaver should stick to writing for the ones who cares for the mystery genre, as opposed to sticking to the maxim of “BOOKS SHOULD BRING MONEY”, like fellow writer James Patterson, and throw away any substance from the book.

8. I have had enough of Deaver, can’t believe he was the one who wrote A MAIDEN’S GRAVE.