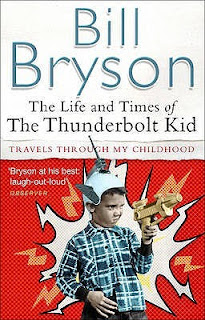 The Life And Times Of The Thunderbolt Kid
Bill Bryson
14th to 18th October, 2012
5 stars

Generally I tend to stay away from non-fiction but Goodreads had long ago recommended Bryson to me. But his books were so costly that I never came around to buy them. So when I found his books at a used book store, I could not help but grab them.

Since I was not born in 1950s, my dad was born in 1950s, but not in Iowa instead in Rajasthan in India, I took every fact and incident stated in the book at its face value, and laughed out loud, only to stop, so that I can move on to the next paragraph.

This book was one of the funniest books I have read. The way Bryson describes the events of his childhood, though at times leaving me scared (especially the ingenious yet scary endeavours of Doug Willoughby, the treatment of Milton Milton among others), made me laugh without any restraint and move forward with the book.

The book was a fast read. Though it was outside my comfort reading zone of small paragraphs, the prose never slowed down the book. Such was the power of the Thunderbolt Kid. From Chapter 1, Bryson converted his autobiography into an adventure. Oh! I forgot, his was the adventure of the Thunderbolt Kid, the son of King Volton.

And what descriptions!!! From Bizzaro world to Dewey the dog, to strippers tent at the Iowa State Fair or putting one’s hat into another’s hatbox. Perfect words for the appropriate events.And, the last chapter. Oh! The last chapter. Seldom had I read something that had made me this sad. His friendship with Jed Mattes, his search for the city of his youth or even the retirement of the Thunderbolt Kid.

Truly a master writer, who made me laugh throughout the book, only to make me realise that at the end, most laughter are born to shield the deepest sorrows!!