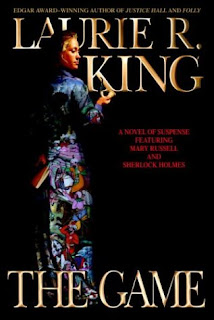 
I can’t and won’t give any stars to this book, as I couldn’t finish it. THE GAME by Laurie R. King, based on the classic KIM by Rudyard Kipling, features amateur sleuths Mary Russell and her husband, another literary heavyweight, Sherlock Holmes, as the duo travels to India, and tries to find Kimball O’Hara, who has gone missing, and is wanted back in THE GAME by the British Government. Yes, the same Kim, Kipling had created. And, by doing so, saving the British Raj from the Russian Bolsheviks

Surely with two fascinating characters, I was eager to read the book. But somehow after reading 90 odd pages, I had to give up.
The plot was going nowhere. The total plot material related to THE GAME and Kim, could have been easily written in 10 pages, and so by default, the other 80 pages became a Yawnathon. And, somehow I became sure that this ratio would continue in the book.

King used two literary heavyweights, who happened to e in public domain. The possibilities for this book was huge. So, when I left the book midway, the disappointment was of equal proportion!!!

I never judge a writer, by a single book. So, definitely I am going to read another of King’s work, considering the fact that she is a well praised and celebrated Crime novelist.
Posted by crimeonthrill at 12:18