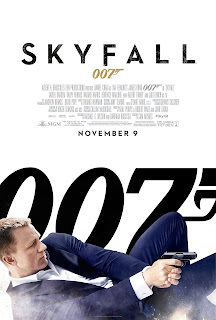 Saw SKYFALL today, and I positively think that this movie is destined to become one of the greatest BOND Film of all times. I know this is a BIG statement but as a Bond buff, I am fully satisfied with what I saw, rather experienced today!!!

Did they make any mistake, NO. There were no mistakes in this movie. Everything was perfectly placed and portrayed.  The easy transition of M, the replacement of Miss Moneypenny, the infallible loyalty of  the British Bulldog. Everything was smooth, from the word GO.

And what tributes, from that old Aston Martin from GOLDFINGER, to the good old James Bond theme in the background. Not the modern version, but the one made immortal by John Barry and Monty Norman, with the surf rock guitar playing those famous notes.

And, what about that sequence of using the Komodo dragon for jumping. Don’t we remember Roger Moore, using crocodiles to do the same in LIVE AND LET DIE?? Yes, this film was nostalgia, even the gun barrel sequence. Pure, no dilutions. Pure and Vintage bond.

What about Ralph Fieness. One of those points which made me think when will the next Bond release, I need to see Fieness as M. No comparisons with Judi Dench , Bernard Lee or Robert Brown. They all had their own immortal signature on this role. But, having Ralph Fieness in the pivotal role do change the equations a bit., with Naomie Harris as Miss Moneypenny.

Just one hitch though. I missed Desmond Llewelyn. His Q, was the best and will be the best. I am sure, with him at the helm of Q branch, Silva would have had a tough time to break into the MI6 system. He never gave an inch to James Bond, so any Silva, is fodder for him, any day any time.

And, lastly Silva. One of the best, one of the cruellest. Goes right to the top, with those who came before him. Remember Francisco Scaramanga??? He was a psychopath too. He even had an island like Silva. Or for that matter Auric Goldfinger?? Wasnt he cruel too, he painted that poor girl in Gold!!!

The locales used were perfect. Albert Finney with Scotland in the back was bleak, cold and captivating. And, Macau?? Another nostalgic trip, for Mr Bond?? Did he remember that gunmaker who supplied Scaramanga with his Golden Gun and bullets??