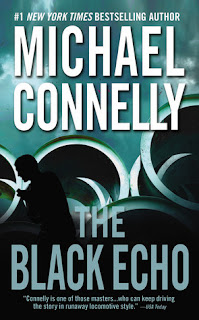 “You are a cliché cop”
This line from the book, sums up the overall feeling and experience I had while reading BLACK ECHO by Michael Connelly, featuring LAPD detective Harry Bosch. The book was full of clichés, scattered everywhere, like dead bodies in a war field!!!
So, first things first. Lets check the points, I mean the clichéd ones, in relation to a police procedural, which must have been present,
1. Bitter Detective who has been demoted – Present.
2. Hero having problems adhering to department guidelines – Present.
3. A war-scarred Vietnam veteran – Present.
4. Hero falling in love only to receive broken heart – Present.
5. Hero is a loner – Present.
6. Hero loves music – Present.

So, almost everything I expected to find in a typical American police procedural was present in this book. So, it was not a wonder, that sometimes while reading it, I found myself wondering whether Bosch is a long lost cousin of John Rebus. The similarities were so uncanny, as if it was almost a family trait. The only major difference being in the choice of music. Rebus like classic rock, while Bosch found solace in Jazz.
“....the only things he spent money on was on food, booze and jazz”
Having a feeling of déjà vu, had heard same sort of character description about a police officer from Edinburgh.

Every character starting from Bosch’s boss to the culprits were true to stereotype. The dialogues were true to form, loud mouthed, bland and clichéd. They failed to invoke any sensation whatsoever.

Now the plot. Somehow it felt, unreal. The crime and the modus operandi was ingenious. But the motive for the crime seemed somewhat farfetched to me. The pace of the book was slow too. For the first 250 odd pages the plot went nowhere. There were very few clues for the reader, and no solid suspects were introduced. I, personally, had a tough time going through those first 250 pages.

So, summing up, all I can say is that it wasn’t a pleasant read. And, it was also nothing out of the ordinary. If given a choice I would choose Morse with Oxford, over Bosch with Hollywood.

My last point is a sort of wondering aloud. I have always wondered why most American detectives have to be such lonely and broken characters. Why cant they be family men, with a normal life?? I am still waiting for the book, where I will be treated to a protagonist who leads a normal life, with a family, and for whom solving a crime is not any sort of crusade, but its just a part of his job. Someone like Inspector Wexford from the other side of the Atlantic.
P.S.
1.Though the book disappointed me, but I am certainly not giving up on Michael Connelly. I had liked his standalone novel,, VOID MOON, and I definitely believe that I am going to like the other two books I have with me in my shelf.
2. The description of the tunnels and the tunnel rats from the Vietnam war was what prompted me to give this book a 2.5 stars instead of a 2.