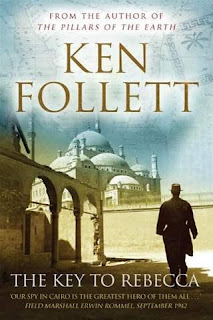 The Key to Rebecca

"Last night I dreamt I went to Manderley again"

I encountered this famous line, in the very first chapter of the book. But, unlike the book to which this phrase originally belonged; I thoroughly enjoyed reading this book, THE KEY TO REBECCA. I had read it long time ago, and while reading Du Maurier’s Rebecca I found out that this book was used as the code book by the German spy in THE KEY TO REBECCA. At that moment I decided to read it once again, as although I remembered the overall plot, but I had forgotten the little details, along with the twists and turns present. And, lastly I was also eager to read a spy thriller set in World War 2 era as it has been quite a while since I had read one.

The book starts off with the Nazi Spy, codenamed The Sphinx, crossing the Sahara desert on foot, and entering Egypt armed with two radios, a copy of Rebecca and a knife, to spy behind enemy lines with the intention of helping Erwin Rommel by providing him with British War Action plans and other intelligence. The plot revolves around how a British Intelligence officer Major William Bandam, with the help of a girl called Elene Fonatana, tries to stop the spy, and save the allies from certain defeat in North Africa.

This book was a classic Ken Follett , World War II espionage thriller. It had all the trademarks of an early Follett novel. A German spy, who is a borderline psychopath. A very human British officer standing in his way, and, which is present in almost all Follett novels, a strong female character who plays a pivotal role in the cat and mouse spy game.

Also present was the nail biting suspense and less abundance of action, which according to me was a good point, as I definitely feel that a prolonged action sequence slows down the pace of the book. And, added to all these, the exotic location of Egypt also added to the reading pleasure of the book. Although, some people comment that Follet’s recent historical fiction is far better than his earlier spy thrillers. But as a dedicated Follet fan I can safely say that I enjoy his spy thrillers as much as I enjoy his latest offerings.

Summing up, I would say this was a fast and enjoyable read, and I would definitely recommend this book to anyone who is looking for a fast WW 2 spy fiction, which has more brainwork than action.

P.S. This book also portrayed the same feeling I had towards Daphne Du Maurier’s REBECCA. As Maj. Vandam’s son Billy said, “…it’s about some silly girl, who’s afraid of her husband’s housekeeper.”