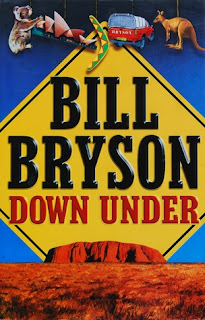 As I had already stated in my review of Bryson’s “The Life and Times of the Thunderbolt Kid”, that I can safely divide my reading period between the periods before and after I had read Bill Bryson. And, after reading Down Under I realized that I have never read a travelogue as well as this. Earlier I used to read a lot of Paul Theroux’s works, but lately I grew tired of his cynicism, and couldn’t find myself search for more of his works.

And so, when I was searching for a travelogue to read, I spotted this book in a second hand book shop and I deftly bought it. And , the money was well spent. Although the book fell in the in my discomfort zone of being a non-fiction with LONG paragraphs, I never had any problems breezing through the book. And, not only did I not have any problems, but I thoroughly enjoyed travelling with Bryson around Australia.

I liked the thought process of the author. He primarily goes to Australia to enjoy himself and travel, but never stops short of criticizing the faults he finds with the Australian society. And, the best part about this criticism is he does it in a way, which doesn’t makes it sound like whining of a man who doesn’t seems to find any good, in any of the places he visits.

The comic timing was impeccable; he used his words to make the reader laugh reading a travelogue, and most importantly the words helps the reader in visualizing the places and events, which he so funnily describes.

I can’t comment on the adequacy on the number f places visited by Bryson, as every place he touched were new to me. And, apart from the travels, which makes this book a must read for any travelogue fan, the amount of history Bryson stuffs into this book is also an added pleasure. From the sad stories of failed explorers to the harsh and cruel treatments of the Aborigines ending with the death of the crocodile SWEETHEART, who just wanted some peace from the sound of motors, Bill Bryson really makes Australia an interesting place!!