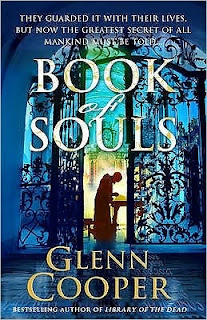 “Much Ado about Nothing”
The emotion that came to my mind after I had finished reading “The Book of Souls” by Glenn Cooper. The book was another conspiracy thriller which combined books written by ancient monks, with undiscovered letters written by William Shakespeare, John Calvin and Michael Nostradamus, with modern day Government baddies trying to destroy peace and harmony, only to be thwarted by an ex-FBI and his wife, Will and Nancy Piper.

The book started off well, and up to 300 odd pages, the pace was really good. Never did I find a moment where I felt bored or was tempted to skip pages. The writing style, the flow of events and the way in which the writer connected, or rather presented the past and the present was truly worthy of applause. Without any hurdles, whatsoever I was drifting in and out of one historical period into another and back into the present.

But, then after finishing 3/4th of the book I wondered, where is the crime?? Where are the criminals?? And, most importantly, What is the reason for doing all this?? The reason when revealed at last, was certainly not befitting the wide web, and the foreboding of immense doom, the writer had created. So, it was much ado about nothing.

But, kudos to Glenn Cooper for writing, scenes which were believable, featuring characters from the book teamed with notable historical figures. But, while reading, especially the first half, I felt that, had I read the first instalment of the book, I would have understood this one more deeply. Which is a down point, according to me, as not everyone would have the correct sense to read the first book first and then go for the second one. And so, anyone who would have read the second book first would have some difficulty in getting the flow of events, just as I had.

So, summing up, my feelings about this book are mixed. I hugely enjoyed the plot build up, laced with historical characters and the suspense surrounding them, but was terribly disappointed with the ending which was almost an anti-climax. So, my rating for the book would be 2.5 out of 5.