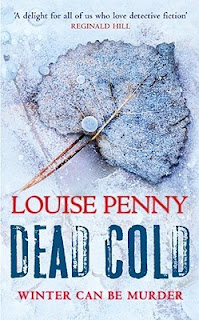 Not so long ago, I was recommended a Louise Penny novel ‘A Fatal Grace’ by my Goodreads friend Neena. But, as there was no chance that I could get a copy of the book, I dropped the plan of reading her. Until, I found a copy of ‘Dead Cold’ in a second hand book shop. I promptly bought it, and completed the book in two days.

Inspector Armand Gamache of Surete is called upon to investigate the murder of a lady in the picturesque village of Three Pines. The murdered lady, who had recently bought a house in the village, was electrocuted to death while attending the annual curling festival, held in Three Pines.

This was definitely one of the finest books I had read in a long time. I have grown up on the mysteries written by Agatha Christie. So, a murder mystery set in a small village, with limited cast and a murderer with a strong motive never fails to excite me. And, to add to the excitement was that a reviewer had compared Gamache to Hercule Poirot and Inspector Morse, both favourites of mine. As a result, I was double excited and I had to read the book.

Louise Penny in the book had used a lot of pages to describe relations between different characters and the psychologies of the different suspects, but to her credit, she never let those pages and descriptions overshadow the main theme of the book, which was solving the murder. Moreover she managed to make these conversations a part of the whole crime solving process; as a result while going through the book, not for once did I skip pages or get bored.

Although Armand Gamache was compared to Endeavor Morse and Hercule Poirot, both bachelors, I found him more akin to Inspector Wexford. But, this similarity would not take away the fact that Louise Penny have creates a highly original and likable character. Gamache is definitely my current favourite. The best thing about this man is, that he is so Normal.

Summing up, this book is a definite 5 star for me. I enjoyed reading it and I do have plans of reading more from Louise Penny in the future.
Posted by crimeonthrill at 22:25