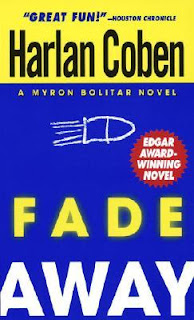 “Dreams never die. Sometimes you think they are dead, but they are just hibernating lie some old bear. And, if the dream has been hibernating for a long time, that bear is going to wake up grumpy and hungry”

“He truly believed that no one could love him, and no matter who you are, that hurts. It made you insecure. It made you want to hide and build fences”

“He has the bone weary look of a survivor, who wasn’t so sure the dead weren’t the lucky ones”

It had been almost an year, after I had read my first Harlan Coben thriller, GONE FOR GOOD, which was fast, twisted and very satisfying. The book was good enough to convert me into a Harlan Coben fan. So after such a long time when I picked up FADE AWAY, I was expecting a fast thriller and was also expecting my status as a Harlan Coben fan to continue. My expectations were fulfilled on both the count.

Myron Bolitar, a sports agent and a former basketball player, whose career was cut short by an injury, is called upon by the chief officer of New Jersey Dragons to investigate the disappearance of one of their stars Greg Downing. Downing was in the past, an opponent of Bolitar. So, Myron goes about his job of finding Downing and we the readers get to read a fast and compact thriller.

The plot wasn’t GREAT, but it wasn’t BAD either. For a thriller featuring an amateur detective, it was more than enough. The book had its fair share of action sequences but they were not overwhelming on the plot, which would have made me skip pages.

The characters were believable, but then again, who read a Harlan Coben book for characters and their development. At least I don’t. This book had some great lines, although clichéd, but great nonetheless. Three of those are listed above.

Summing up, a highly satisfactory and fast read. The only reason I am giving this book 4 stars instead of 5 is because, by the end of the book, there were some unanswered questions lying around. Had there been cleaned up, the book would have got 5 stars!!
Posted by crimeonthrill at 08:37