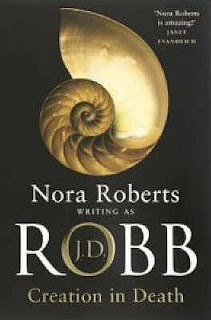 Even before I had read a single page from the book, I was prejudiced. I couldn’t help it, as the book had so many stereotypes, which I had not only come to loathe but absolutely hate. Those were,
1. Serial killer who has a media provided nickname.
2. Female lead with husband as sidekick.
3. Lots and lots.....and lots of police personnel along with their names.
4. Romance novelist writing crime fiction.

So, I am frightened of serial killers with nicknames, not because that they might get me. But, because of the fact that by the end it always comes down to fact that,
1. They belonged to the upper echelons of the society.
2. They went wacko because of some naughty things done by a family relative, most of the times its either wife or stepmother/mother.
3. They chose their victims without any motive.
4. They were given absurd nicknames by the media.
Of all these the most irritating is the fact that they have no motive whatsoever for killing the victims. A crime story without a motive is, yes you got it right, BORING!!!

I am not a sexist, and I enjoy feisty female lead characters, but not someone whose husband tags along everywhere she goes, looks over her like a mother always nudging her to eat and rest, and PEPPING her up when she is down. Yes, they PEPPED once in the book while the investigation was going on!!! Sorry, Eve Dallas, it’s nothing personal, but you are no Kinsey or Tuppence, and you have got clichéd and stereotype written all over you, right from your dialogues down to your attitude. But, you are definitely better and more entertaining than a certain Adam Dalgleish and his poems!!!!!

Now, look at Jack Reacher or at Inspector Morse. Do they need an army to solve a crime??? No. While the former relies on his fist, legs and brain to do the job, the later has Lewis to do the legwork and his brain to the thinking for him. And, that’s the reason you see that they and their readers never gets confused. What happened with this book was, by the half of it, I was having difficulty in keeping tabs on the names of the people for the law and against the law. SO CONFUSING and BORING!!!!

And, lastly, I have had my brush with Tami Hoag and her “CRIME NOVELS”. So, I am well aware of what can happen when a romance novelist starts writing crime fiction. Nuff said!!

But having said all these, I should mention that the book was fast. Yes, the pace was good enough to not let those prejudices to hamper my reading. Well, anything is better than a PD James novel!!! The only thing which stopped me from giving this book a 3 star rating instead of a 2.5 is the ending. The ending is a way disappointed me. Had it been a bit tighter it would have pleased me, and I would have happily gifted it a 3 star rating.
Posted by crimeonthrill at 08:24