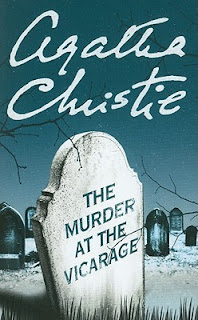 Murder At The Vicarage

The Queen Of Crime never fails me.
While reading a crime novel, I always yearn for some points,
1. Numerous characters.
2. Abundance of suspects.
3. Plenty of clues.
4. An ending with a delicious twist.
And there are points which I absolutely loathe, one of them being page long descriptions of objects and events which are not remotely related to the crime.

So, when it comes to Agatha Christie I am always presented with a novel which has plenty of characters, numerous suspects and a memorable twist to end the book. And, I guess this is what makes her the queen of crime, always presenting the reader with a tight plot leaving him satisfied yet yearning for more.

Murder At the Vicarage, the first Miss Marple novel starts of in the village of St. Mary’s Mead where an old Colonel Protheroe , is found shot to death in the study of the village Vicar, Len Clements. Sometime after the murder a couple of suspects claim responsibility but are soon released as medical evidence points out that they couldn’t have committed the crime. And, thus begins the hunt for the murderer by Inspector Slack and Colonel Melchett as they are assisted in the task by Miss Jane Marple.

The whole book is narrated by the Vicar. Miss Marple though a central character, appears sporadically in the book. It is almost a cameo appearance, but she delivers, at last, when she solves the crime and brings the culprits to justice.

I had read this book a long time ago, and was aware of the identity of the murderer. I had also seen the TV movie adaptation featuring Geraldine McEwan as Miss Marple, but re-reading it proved to be equally satisfying. Anyone reading it for the first time will surely have a tough time guessing the identity of the killer before the last pages had gone by.
Posted by crimeonthrill at 08:27