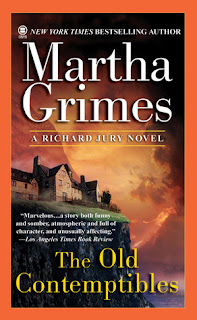 Almost all the books I have marked as “UNFINISHED” were left after I had finished at least 50%, and I was done with the debate regarding whether or not to continue with it. The same problem happened with this book. Only with this one, I decided to finish it, and I can’t say that it was a GOOD decision to continue. Rather it was an OKAY-ish sort of decision.

Richard Jury after a short term romance with a lady decides to marry her only to find dead and him, being suspended from the force and being suspected of her death. With no official capacity to search for her killer, Jury sends his friend Melrose Plant under the guise of a librarian to the old country home of the lady to investigate and try to find out the culprit.

The overall plot was decent and effective as a cozy mystery. No bloodshed and no gore!!! But then again why do we read a Cozy??? I read them for the clues, the twists and turns and the solution. Neither do I read them for blood and gore nor for long insightful conversations, which have no bearing on the main plot and which bores me to death. Sadly, this was the case with this book. The death came too late (she was poisoned, NO BLOOD!!!! so SAD) and after that, there were hardly any clues, so naturally I stopped expecting any sort of twist. Actually a twist comes only if the plot has a red-herring, and red-herrings appear only if there are clues lying around to lure them!!!

But, there were no clues, no red-herrings and sadly no twists. Instead there were CONVERSATIONS, actually LOTS OF THEM, which frankly seemed meaningless and boring. They muddled the plot, confused me and by the end of the book when another murder victim was mentioned, I realised that I had forgotten about this character spoken about. And, I could also guess the culprit the moment the character was introduced, the way that person was behaving and speaking gave away the fact that here is the culprit. So, again no excitement for me there!!!

Richard Jury is no Endeavour Morse. But, he has his own persona and charm, which makes him much more believable and likable than some other over the top fictional poet detectives roaming around. I had liked “Man with a Load of Mischief” but sadly didn’t enjoy this one. But, I won’t give up on Grimes yet just because of this one book. I have another Richard Jury mystery on my shelf which I plan to read and enjoy.