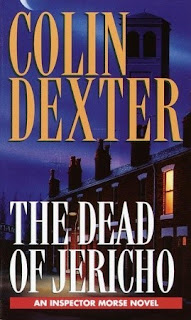 The Dead Of Jericho

“Morse nodded too, as if he was also not unacquainted with the agonies of unrequited love”

Sometime back I was reading an interview of Colin Dexter, where he remarked that although he realises that authors like Ruth Rendell and P.D. James dwell more on the psychological side of a murder mystery, he, Dexter, personally likes more the twists and turns present in a whodunit. And, this is one of those very important reason for which I enjoy a Colin Dexter novel more than a PD James novel (actually I DONT enjoy reading PD James).

The Dead Of Jericho, is the fifth instalment of Inspector Morse mysteries, where a dead woman(apparent suicide) and a murdered man makes Morse wonder whether they were connected and whether there was any foul play involved in the case of the woman. Although not officially heading the case, Morse starts making his own enquiries. Later when the case is getting nowhere, Chief Strange decides to officially ask Morse to head the case. And, thus joined by Lewis, Morse cracks the case, providing us with a very enjoyable mystery.

All the traits found in a Colin Dexter novel were present. Red Herrings, twists in the tale, subtle humour and Morse getting infatuated with a female victim.

But once again the best aspect of the book was the writing style. In a single chapter, Dexter describes seemingly unconnected events, which on their own bears no connection to the original plot, at least so it seems, at the time of reading them. But at the end of the case all of those unconnected events connect up one by one to form a definite and clear picture.

Summing up, I loved and enjoyed reading the book. But, somehow I feel sad too, that one by one, as I FINISH OFF THE Morse novels, I am nearing the point where there won’t be any more to read, and that would be my personal Remorseful Day, as I would bid adieu to my favourite detective. Till then, I will keep looking forward to reading the next Inspector Morse Mystery.