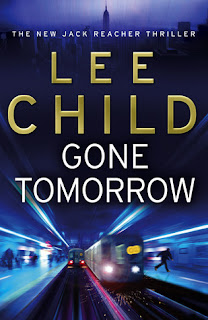 The 13th chronicle of Jack Reacher’s life penned by Lee Child. The time frame of this novel is post 9/11, almost five years after the death of Jack’s brother Joe, in Killing Floor.
The book opens with Reacher travelling in New York subway, while he suspects a fellow traveller, a woman named Susan Parks, to be a suicide bomber. He tries to talk her into stopping her from carrying out her plans, when she brings out a gun, and shoots her head to kingdom come. After that, literally, all hell breaks loose. We are then taken through a roller coaster ride of 443 pages, which consisted of politicians with dirty secrets, women with hobbies of cutting up male prisomers, Reacher getting busted by feds, and everyone except Reacher, lying thorough their teeth.
The plot, as usual, was a bit improbable, but not slows. Ina athriller when a protagonist gets caught up in the events happening around him, there is always a feeling that there is too much of coincidence to be true. As, in this book, Reacher follows up on the lady’s death, just because he felt he pushed her into committing suicide. Which is very uncommon, a man, especially someone like Reacher who hates spotlight and brushes with the law, would have just walked away.
But such small points wouldn’t take away the fact, that this was a fast and enjoyable read. It’s very common, with thrillers with 400+ pages to have a portion, which is boring. But, that is not the case with this book. Once you get into the saddle, the ride will stop only after the book is over.
The characterisation was, well, adequate for a thriller. The dialogues, the best in the business. Lee Child surely knows how to create a hero and put words into his mouth. Another favourite aspect of mine, the ONE MAN ARMY attitude of Reacher. He takes on a whole army of 20 guys all alone, and makes it look as easy as buttering a bread.
Barring one small hitch, about an unanswered question regarding the motive, this book is surely one of the best to come out of Child’s stable.
P.S. Thumbs up for the first person narrative.