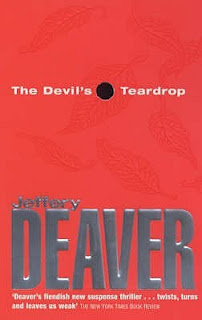 The Devil’s Teardrop by Jeffery Deaver, is a standalone novel, featuring Special Agent Margaret Lukas and document examiner Parker Kincaid. The story is set in a time frame of less than 12 hours on the last day of the previous millennium i.e. 31.12.1999.
The novel starts with a lone gunman, calling himself the Digger, spraying bullets from a silenced machine gun into a crowded station on New Year’s Eve in Washington. Sometimes later the mayor gets a ransom note asking him to pay $20 million, or else Digger would go on shooting at regular intervals. Agent Lucas heads the case, calls on Kincaid, to help trace evidence from the note delivered to the mayor. In the meantime, a hit and run victim, is identified as the controller of he Digger. Now, with on one to control the gunman, he will kill time and time again, before someone stops him.
This is pure VINTAGE DEAVER. The plot, in itself would fool the reader. Halfway into the book, I felt that, this was all about catching and stopping the digger, but somewhere Deaver was chuckling, and I was fooled. Because, during the last 50 odd pages, he started twisting me around, and presented me with a plot, which was ingenious and devilish to the core. This book is a must read for any thriller lover.
Characters were well drawn up. The special feature, which I like in a Deaver novel is, that his antagonists are much more intriguing than his protagonists, they are evil to the core, doesn’t hesitate to kill. What makes them scare and interesting is that, Deaver through them makes us realise, that actually in the world out there, people roam about, with suck psychopathically evil tendencies.
As always, he didn’t waste much words on the personal lives of the protagonists, they were given pages, but never did those information become a burden to the plot. They were perfect in size, to be appreciated in between the flow of the plot. And, like his other books even this one was a treasure trove of information, as in Maiden’s Grave he told us about the world of the physically challenged, in this one, he makes us go through the world of calligraphy and forgery.
The reason, I gave 4 stars instead of 5, was a minor point in the plot, which I found hard to believe. Except that this book deserved a 5 star rating.

P.S. There is a cameo appearance, in this book, from one of his regular protagonists.
Posted by crimeonthrill at 08:56