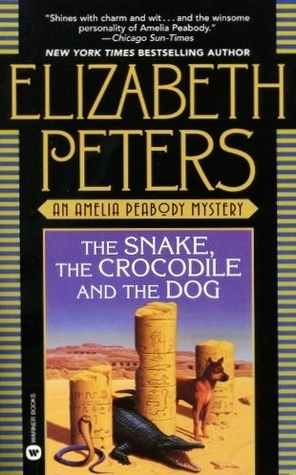 “No woman really wants a man to carry her off; she only wants him to want to do it.”

The Snake, the Crocodile and the Dog by Elizabeth Peters is the 7th instalment, of her highly acclaimed crime series featuring Amelia Peabody-Emerson and her husband Radcliffe Emerson. The novel begins with the Emersons returning from their last adventure in the Lost Oasis, with the young girl Nefret. As they try to introduce her into English social life, Nefret, who previously had no brushes with English society, comes face to face with meanness and snobbery from girls of her age. With coming of fall, the Emersons decide to return to Egypt, with Nefret deciding to stay back in England, along with Ramses, Emersons’ son. Trouble starts once the Emersons land in Egypt. After the customary greetings with old acquaintances are over, a man tries to kidnap Amelia during a ball, as Emerson is attacked by three men. However, their plan is foiled, but a few nights later, Emerson gets kidnapped, while returning from dinner. Although Amelia, with assistance from an old friend Cyrus Vandergelt, rescues Emerson, only to realise that he is suffering from Amnesia and can no longer remember anyone. Back in England, both Ramses and Nefret face assailants, kidnap attempts, and unsuccessful burglaries.  Now, as the blurb declares, Amelia must fight to thwart the evil forces and rescue her marriage.
The plot, of the book, in all, was not very twisting or for that matter neither the crime was of high quality. The first 100 odd ages of the book was very slow. Now, this is due to the fact that the first book I read was the 7th in the series. There were many characters and many incidents referred to in those pages which took place in the earlier novels. But, not once did I find those pages boring. Coming to the crime, it was very vanilla compared to the exotic crimes we get today. A man got murdered only after 3/4th of the book has gone by. After completing the book I would say this is much more of an adventure than a crime novel, as detection or fact finding missions are definitely missing.
The characters were one of the best I have come across. Amelia Peabody, is definitely going to be one of my favourite woman characters of all time. Here we find a lady, who is strong; both physically and mentally, always ready to step up to confront any kind of prejudice coming from the male society. Yet, she is not a person, who is not prone to hearing sweet endearments from her husband. The pain she goes through while she sees her husband not recognising her is truly heartfelt. But, the most wonderful character strait I found in her was , her love towards animals. She steadfastly refuses the donkeys to beaten, she offers food to mongrels. Now, maybe in todays world this maybe be very common, but a woman in late 1800s to feel such compassion for animals is truly wonderful.
Emerson is gruff, but with a softness inside him. But, the best male character by far was Ramses, their son. The letters he wrote to his parents, his endeavours to keep his family safe, his budding crush towards Nefret, all makes him, a character , reading about whom always brings a smile to the reader.
The language was funny, though being a bit old fashioned. It wasn’t overbearing, the paragraphs were modest in size, the sentences mercifully short. But what stood out, was the description of Egypt. In reading this book I also, had the opportunity of visiting Egypt. The travelogue was calm, and was devoid of sharp criticism, and sarcasm found in the travelogues of today.
One of the best books I have read in recent times, surely this won’t be the last of the Amelia Peabody series I would be reading.