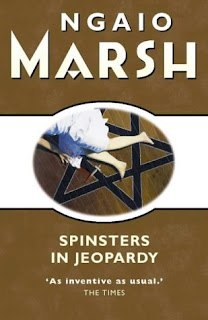 This was my second Ngaio Marsh book, featuring British CID detective Roderick Alleyn. There were two aspects in this book that struck me as out of ordinary for a Marsh novel.
1.There were no references to the theater and play. The plot was without any connection to the stage. Most of her works are very much related to the stage, as her greatest passion was theater.
2.This was not a whodunnit, this was much more, a thriller, where the good and the bad were defined and segregated from the first chapter. So, the element of mystery was sadly missing.
The first point never bothered me, because I like mysteries and I never care whether they are set on the stage or on the streets. And, just because of this I was a bit disappointed with this book. Frankly speaking, when it comes to a thriller, it must have a lot of THRILLING moments in it. And, sadly, that was very much missing. The book had its own pace, but it wasn’t enough for a thriller.
There were hardly any THRILLING moments, which would put you on the edge of your seat. The sedate pace was perfect for a whodunnit, which the book was not.
However, there are no complaints regarding the characterization. The characters were well developed; and the language reflected the setting of the story, which was in France.
Not the best to come out from the pen of Dame Marsh, her other works are better, and that’s what made her one of “Golden Age's Queens of Crime”.
Posted by crimeonthrill at 10:16