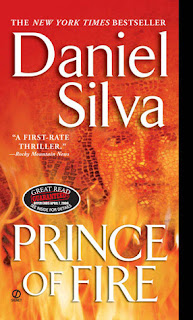 It had been a long time since I had read a spy thriller. I started my reading habits in school with Frederick Forsyth, Robert Ludlums and others. Somewhere in the middle I turned wholly towards detective thrillers. So, when I started this book, I had a lot of expectations from Daniel Silva. By the end of the book, he had managed to fulfill almost all off those expectations.
This book is about the protagonist, Gabriel Allon, trying to stop a mysterious terrorist, Khaled, from unleashing a wave of terror in European cities, on Jewish targets. Khaled apparently, has a celebrated terrorist blood running in his veins. Gabriel fails to stop him for carrying out his plot, but eventually manages to kill him in the end.
This book has a fast moving plot, but there is a certain lack of tightness in it. The flow of events for the protagonist was to smooth, for my liking. There was no visible offensive from the antagonist, until 2/3rd of the book had gone by. I like a thriller where the hero has to overcome a few hurdles to get to his target.
Another shortcoming I found in this book was that Khaled, being a master terrorist, was not developed nicely. His appearance in the book was very less, and left me wanting to know more about him, his exploits, and his modus operandi. I felt, that all the baddies deserved a little more exposure in the book.
One thing I liked was the way in which the author connected actual historical events with the protagonists in the book. Like the hero being involved in OPERATION WRATH OF GOD and so on.
The writing style was pulpy, the book had very few dull moments. In all, the book, in-spite of the short comings, was a page turner. Definitely one of the better thrillers I have read in recent times, looking forward to read more from the author.
Posted by crimeonthrill at 13:25