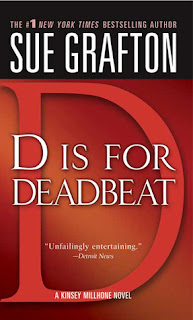 This is the fourth installment of the Kinsey Millhone series by Sue Grafton. Though I enjoyed the book, but I won’t say that I was satisfied with it.
Firstly, the concept, that a P.I. would search heaven and earth, to find a bum who issued her a cheque which bounced, is not palatable for me. I mean, she had done only a few hours of work, and when she found out that he can’t be traced, there is always an option of writing it off as bad debt.
Instead she went on to prod and probe, and in the process finds out that the person she was searching for was found dead. When police was ready to believe it was an accident, Kinsey, believed that it was murder.
The book, picks up pace from here, every aspect of a Sue Grafton novel was present. Starting from the patient legwork, to asking a lot of questions. The sassy dialogues, the believable characters trying to hide facts from the P.I. And, we also get to see a bit of intimacy between Kinsey and her buddy Jonah Robb.
The ending for me was a let-down. Unlike her other novels by Ms.Grafton, the process of revealing the culprit is not done by Kinsey, the culprit reveals itself. Although Kinsey, did move in the right direction, but I like those situations where she puts an odd piece into the puzzle, and finds out the killer herself, which was not the case with this book.
For me, reading a Sue Grafton novel is always like a P.I. job. The element of thrill. And surprise, is there, but what is more importantly present is the level of patience. Her, books are never racy, or wouldn’t make anyone’s blood race. The reader has to patiently wade through the plot, put in legwork i.e. move through mundane fact finding and interview sessions with the P.I. And, then at last, put together all the pieces to find the answer to the puzzle.
Posted by crimeonthrill at 07:45