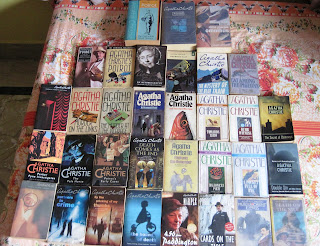 I started reading her books, borrowing them from my school library. Murder On the Links it was. The year was 1997. My first Christie. I can safely say I did not like it. Who was this pompous silly moustached Belgian??? Why does he have to be so funny??? I never did understand why my seniors were so enamoured by this little Belgian with an egg shaped head, always so sure of himself and his little grey cells. So, I happily went back to my dose of comics featuring yet another Belgian, Tintin.

2004 and I started my graduation course, and I started searching for something interesting to read. And I came up face to face with Agatha Christie again. I hadn’t forgotten the last time, yet I took a chance and bought the book. MURDER ON THE ORIENT EXPRESS it was. And the rest as they say is “STILL CONTINUING”.

Almost a decade has gone by, yet my admiration for Dame Christie has grown, by unhealthy proportions. Marple, Poirot, Parker Pyne, Tommy and Tuppence, her standalones, I have read re-read them time and time again, yet I am never bored.

And, then came the movies and the TV series. Oh, what joy it was to finally see Poirot and Marple in flesh albeit inside the idiot box. But, the stories became alive, gave a new dimension to my obsession. They say Ustinov wasn’t fit as Poirot??? I beg to differ. Everyone from Finney, to Ustinov and off course Suchet added color to the enigmatic Poirot. The same can be said about Marple. Joan Hickson to Geraldine McEwan and now Julia McKenzie, everyone has added their own colour to the already colourful Miss Jane Marple.

Now I read only thrillers. Nothing else. How can I? Christie showed me that in detective fiction, there is hidden the greatest emotions of a human being. Greed, anger, lust, jealousy drive normal people into taking away lives, and then comes the NEMESIS, in guise of a moustached Belgian or a old British lady and shows us that come what may the good always triumphs over the evil. Isn’t that, what we all have been taught from our childhood?

P.S. PD James in one of her essays said that Christie wasn’t as good a writer as Marsh, Sayers or Allingham. I beg to differ, Agatha Christie was, is and will remain the GREATEST of the four QUEEN of Golden Age Crime.