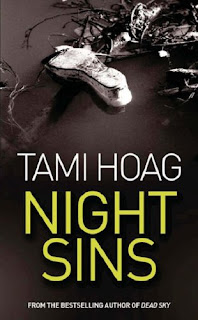 In this book, a kid , Josh Kirkwood, is abducted when his mother forgets to pick him up from his hockey practise. A lady officer, Megan O Mally is sent by BCA to Deer Lake to help the local police, led by Mitch Holt to solve the case.
I never had any huge expectation from this book, the last few crime novels which I have read, which deals with kidnapping, the culprit invariably turns out to be a psycho who just kidnaps, to satisfy his lust for power and he has no intention to demand any ransom. So, was the case with this book.
Now, this was a fast read, but I also found myself flipping through pages without reading them, because I was not really interested in the budding relationship between the two protagonist. This angle totally broke the speed of the book, and made it 75 pages too long. And, seriously, a child was missing, and these guys had no reason to waste time and pages trying to find their soul-mate, instead of the culprit and the child.
And the ending was BIG let down. The book ended suddenly. Even the culprit showed himself to the police, there was no analysis of facts, to find out the culprit among the red herrings. And, on top of that Mitch and Megan got engaged. That was fast, they barely knew each other for a week.