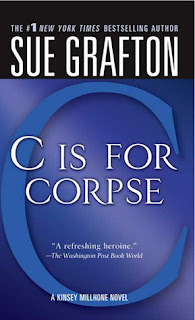 
The third installment of the Kinsey Millhone series. In this book the P.I. met aboy by the name of Bobby Callahan, who was victim of an attempted murder, when the car he and his friend was driving was pushed out of the road, down a cliff, killing the friend, and seriously injuring Bobby.
He enlists Kinsey to help him find out who is trying to murder him. By the end of the book it turns out that Dr.Fraker, the surgeon Bobby used to work for before the murder attempt is the guilty party.
Bobby was having an affair with his wife, Nola, and he knew that she was being blackmailed by someone in relation to the death of her ex-husband. Bobby discovered who it was, i.e. Dr. Fraker. who was himself having an affair with Nola when her ex was killed.
But gradually she realized that Fraker was a maniac and she wanted to get out of the marriage. But, the doctor had the gun, which had killed the ex, with her finger prints on it, and he was using that to blackmail her.